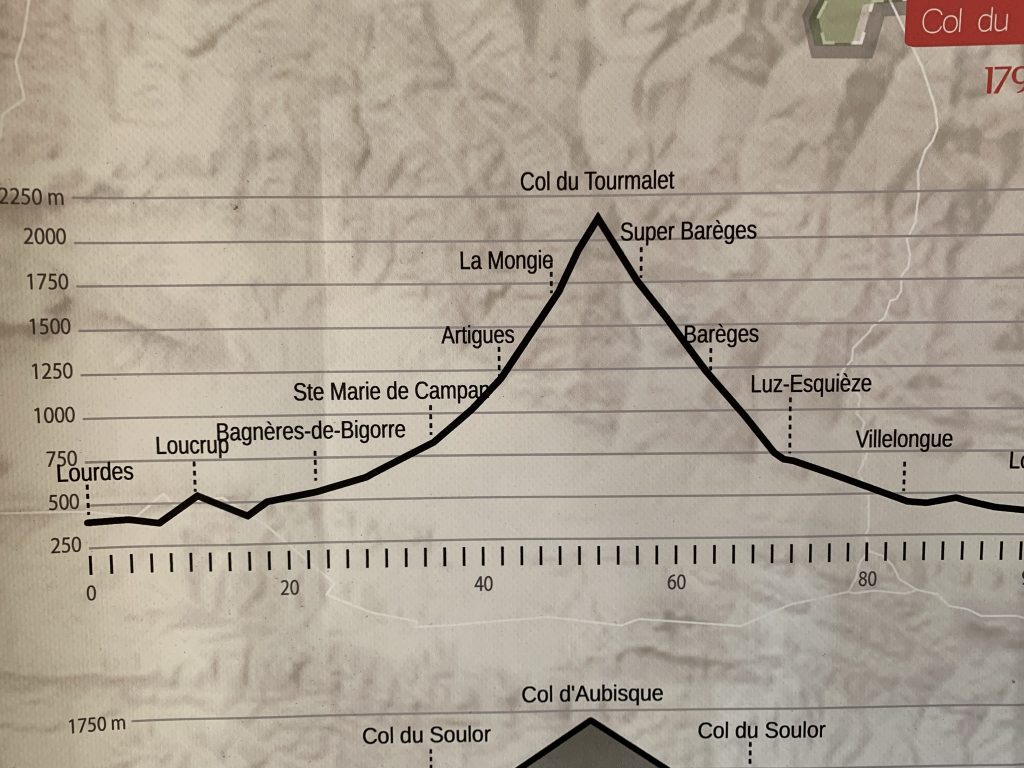 Working systematically outward from Paris — let’s just call it the Center of France even if that’s not mathematically true, all corners but one has now been touched. (GFNY Grand Ballon I am looking at you!) This French soul that has been growing within me since high school (and accelerating for the last 10 years) has seen so much, tasted so much, climbed so much, and experienced as much as it can handle. But it’s always ready for more.

And so now, the Pyrenees. A unique, rugged, rustic, and stunning region of Southern France provides history, challenges (cycling), and nature. Like a much larger, much more grandiose version of the Catskills or Adirondacks (just to draw a comparison — go with it, you’ll be happier, I promise), the Pyrenees tower out of the seemingly untouched countryside, skyward, into the clouds. Visually stunning these peaks become real in a hurry once you point a bicycle at them and get to know them up close. And so our story begins…. 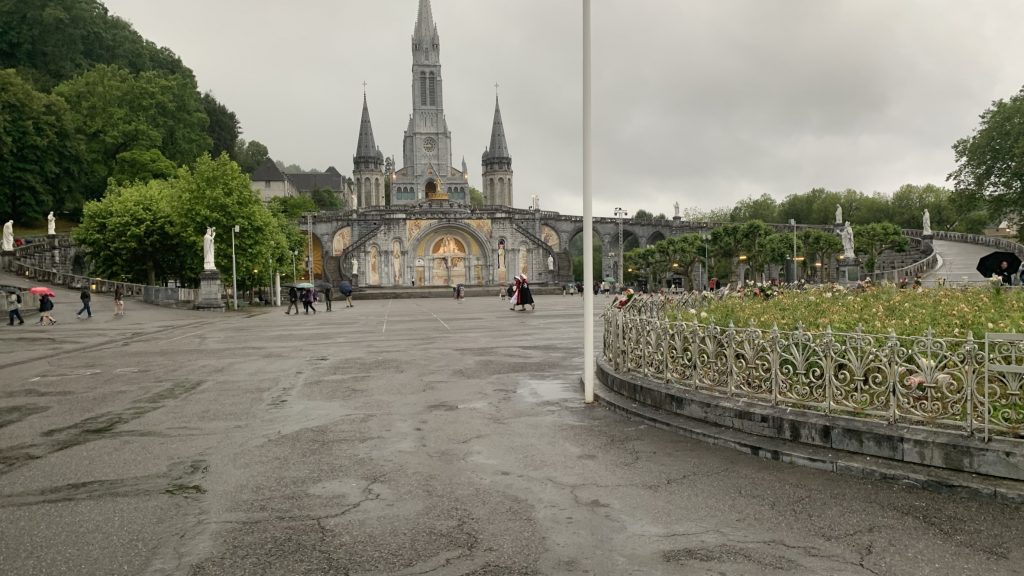 Located in the Haute Pyrenees region of Southern France, the city of Lourdes is famous as a haven for Catholic pilgrims seeking inspiration and hope based on the healing miracles the city has been associated with for over three centuries. As a high school French student at a Catholic high school, Lourdes was one of the key aspects of French history we were taught, and so heading in, I had an idea of what to expect. Nestled in a small valley along the blue, flowing waters of the Ousse River, it is also at the center of the Pyrenees cycling universe and home to the crown jewel climb of cycling, Le Col du Tourmalet. The GFNY Lourdes Tourmalet covers this iconic climb, and like its Alpine sister races, GFNY La Vaujany, and GFNY Alpes Vaujany, would put just about every iconic climb in the region on offer for anyone who was able to get there early enough to take advantage. 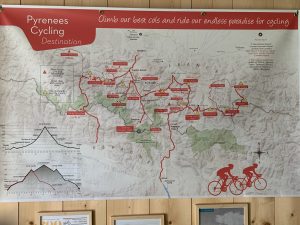 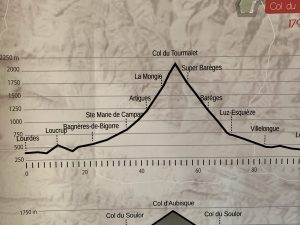 The origins of this trip started with an idealistic concept of “the French Double”. To hit the GFNY Lourdes Tourmalet race, and then motor up to Vaujany with the GFNY France team and follow it up with a defiant second attempt at the GFNY La Vaujany. As the race was initially published it seemed extremely achievable until the racers in the area begged to extend the course at GFNY Lourdes Tourmalet, and what was 100km/2,330 meters climbing race became 157km/3,300 meters climbing extravaganza. Daunting to say the least as La Vaujany is similar in scope climbing-wise, with a car trip and maybe 3 days of recovery before the climbing began again in earnest in the French Alpes. As of this writing, I am happy to report that Jill Patterson and Matthias Van Aiken are on their way to Vaujany to make it actually happen.

Other life commitments intervened and made my decision for me, and so it would be GFNY Lourdes Tourmalet only. But that would certainly be enough.

True to the cliche about planes, trains, and automobiles, the Americans set out from JFK Terminal 8 on the Tuesday before the race. The fast and direct 7-hour flight to Paris would be the easy part. To get to Lourdes would mean a TGV or slower train from one of Paris’ larger stations, Gare Montparnasse, nestled somewhere around the 14th and 15th Arrondissement (district), in Paris. A far reach from Charles De Gaulle airport (CDG), by either train or automobile and with two bikes and somewhere upward of 6 bags in tow. The fastest route to Lourdes was our best option to save part of Wednesday in Lourdes, assemble bikes, and know what was in front of us. With rides planned for Thursday, Friday, and Saturday, the earlier our arrival the better. I got to work on the SNCF app and was able to get a pair of tickets on a 4-hour ride with only a few stops. Other options would leave later, take longer, (and also involve large-scale pain in the ass transfers), and put us into Lourdes close to 23:00. Doable but not the best. No matter — we wouldn’t let that happen. We were on schedule — even early — to land at CDG at 6:14 AM giving us almost 4 hours to collect bags, get in a car, and get the 1 hour across Paris to Montparnasse. Or so it says here on page 6 of the instruction manual. 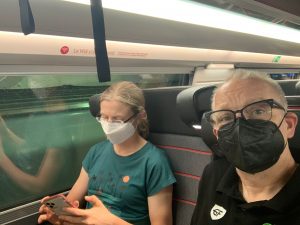 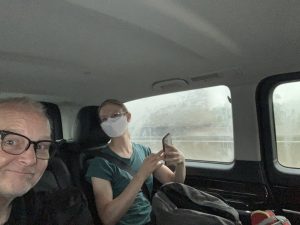 Cleverly concealed in the instruction manual is the time bled out of you by baggage elevator operators going on break and locking the elevator to where your bikes are, major multi-car crashes on the A1, and every, single traffic signal in Paris. After a long wait for bikes to come up from the nether regions of baggage claim, we were starting to fall behind schedule. Although we didn’t know it yet, not having looked at the traffic. With a 10:05 departure from Montparnasse, we got an Uber XL right outside the arrival area, and we both thought we were seeing things when it mapped our travel time at 90 minutes. We would be cutting it extremely close. We got the van loaded with some improvising for the big stuff, (a gentle description I can assure you), and made our way out of the airport in a steady and ugly rainstorm. I had never seen Paris so grey, and dismal. The accident traffic added to the malaise, not to mention the hives I was trying to conceal from my travel companion as we got closer and closer to departure time, but seemingly no closer to the station. As if we could control it, both of us mapping the journey on our own phones, watching the arrival time change like a stock-ticker. Moments of elation at the time moving earlier were quickly taken away, and then finally we were off the highway and onto the city streets of Paris.

Watching the champ experience the sight of the Eiffel Tower for the first time was a short bright spot as it was both a cool moment, and a sign that we were almost there, and we might actually make it. For most of the car ride, I was watching the clock, thinking of new backup plans, and getting ready to put on my lemonade stand uniform so that we could make lemonade out of the lemon we were about to be handed. And as it suddenly seemed most dire, we were there. Rushing up the escalators, knowing we could board up to 2 minutes before departure, they were scanning boarding passes as we got to the platform. We had made it, and suddenly after an acrobatic and anaerobic effort to get all the bags up the stairs where our seats were, we were settled. It was time to find a cup of coffee and close my eyes in that order. We were leaving Paris behind and would be in Lourdes by the afternoon.

A Different Kind of Pilgrimage

The Lourdes station was busy, the town seemed to be active, and as we exited the station planning to attempt the 15-minute walk to the hotel with all bags in tow, a beacon of relief appeared. There was GFNY HQ pickup in progress with HQ team members heading in from Italy, and having boarded our train in Bordeaux. I don’t think the team knew we were on that train but helped us get our stuff to the hotel, get checked in, and find the bike room. Having gotten settled, the smart thing is always to put the bike together. Shake it out, and make sure it’s all working. What got broken, what did you forget? All of those questions would be answered. By 7:30 or so, we had both bikes assembled, but my shift cable had come away and so I had two gears available. That would not make it for this terrain, (or any terrain, my name is not Eddy), so we figured out a nearby bike shop, and made a plan for the morning.

In the meantime, the bike room. The Hotel Gallia & Londres presents itself as a “bike hotel”. And it didn’t disappoint. The bike room sported a turf floor, trophies, photos, and jerseys from past glories (including a GFNY La Vaujany jersey from 2021), alongside a signed green jersey from the tour (I didn’t see who or when). As you entered, greeted by the flawless cedar paneling, a cycling wall map of the Pyrenees gave an orientation. Lockers, bike hangers, and tool racks are handy for getting the bike together and doing the work that goes into getting ready for the shakeout. No bumbling around the bed-chamber, but a real, pro, set up for getting ready to experience one of the literal and figurative high points of Global cycling.

A little quiet exploring of the Lourdes evening, a sandwich, (and later a pizza), and a 23:00 work call would make this a truly long day. close to 28 hours with some cat-naps in between. Waiting for my call, I unpacked and readied myself to meet the group at 10:00 the next morning. Our first adventure would be Luz Ardiden. 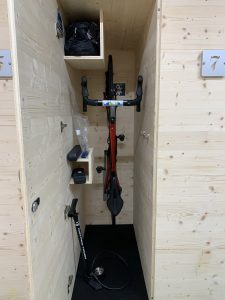 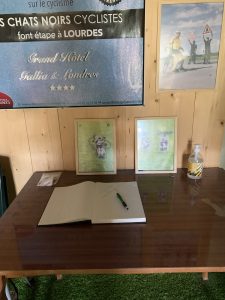 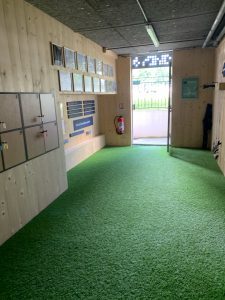 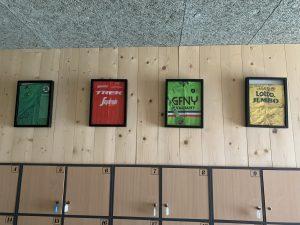 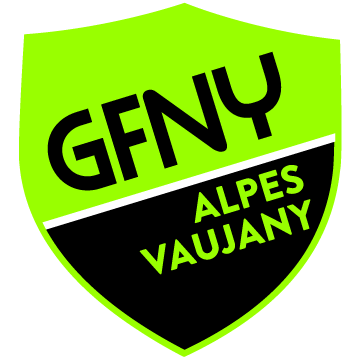